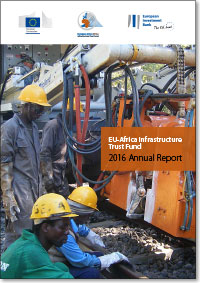 The 2016 Annual Report provides details on the eight grant operations approved during the last year and looks back at the Fund’s track record over the past decade.

The EU-AITF Infrastructure Trust Fund, which celebrates its tenth anniversary in 2017, has supported 111 grant operations to date, totalling EUR 698.4 million and supporting 83 different projects. These projects make a difference to people’s lives since they contribute to sub-Saharan Africa’s economic and social development in the Fund’s four sectors of operation: water, energy, transport and information and communication technology. More than half of the projects have already leveraged concrete investments worth EUR 7.9 billion, which is 18.5 times the volume of grant support.