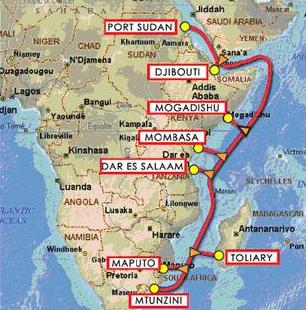 The East African Submarine Cable System (EASSy) project consists of a 10 000 km fibre optic submarine cable along the East African coast, linking Sudan to South Africa with landing points in these countries as well as in Djibouti, Somalia, Kenya, Tanzania, Madagascar, Mozambique, Mayotte and Comoros.   EASSy is the second optical fibre connection for these countries to the global optical fibre network.

The EU-AITF Grant was used for the hiring of the core management team and the balance is of used to pay the management team's costs during the construction phase of the project. A competent management team is key for WIOCC to be successful in selling a new transmission technology in many markets.  The ITF Grant has therefore been instrumental in WIOCC's ability to hire first-class professionals.

Following the completion of the construction of EASSy in April 2010, the system owners have carried out extensive and rigorous tests to ensure that the system meets the highest international standards.  The EASSy system has entered commercial service since 13 July 2010.

The WIOCC announced in December 2010 that the EASSy system would be upgraded in 2011, more than doubling the current available capacity on the system.